What is the difference between web designer and web developer

Comprehensive Guide on difference In web designer vs web developer 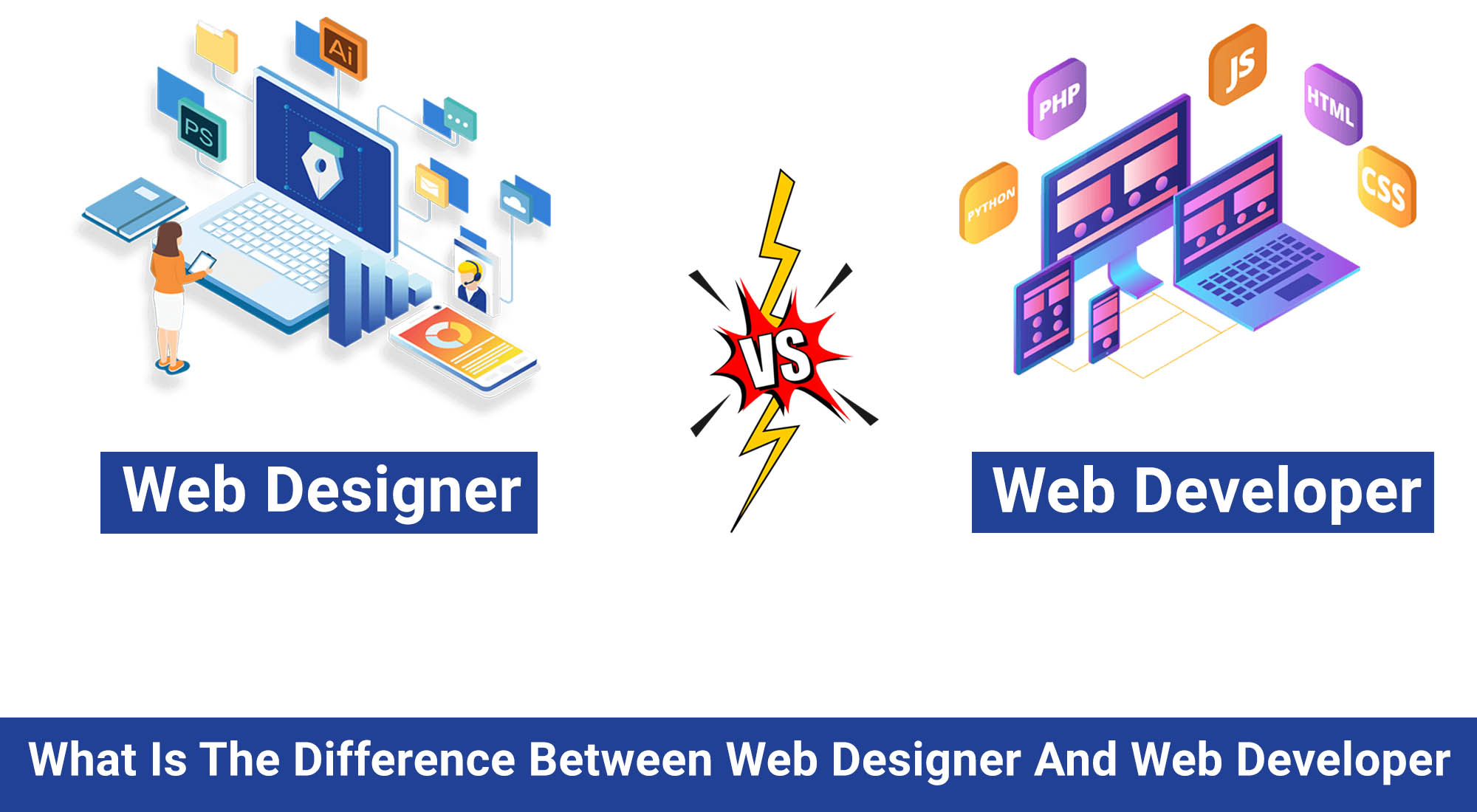 The most intrusive question currently in today’s new emerging technical minds is the difference that underlies web designing and web development. To actually understand about the same one must have in mind that the concept entails bigger details than one can actually imagine. As it is stated, web development is the series of tasks involved in the upshot of website building. There are multiple events that unfold in the creation of the website, starting from designing, the next step of which involves publishing, moving forward to programming and the last step involves managing databases. In short it is the formation of websites, of course through applications that you see all over the internet.

What is meant by web designer ? 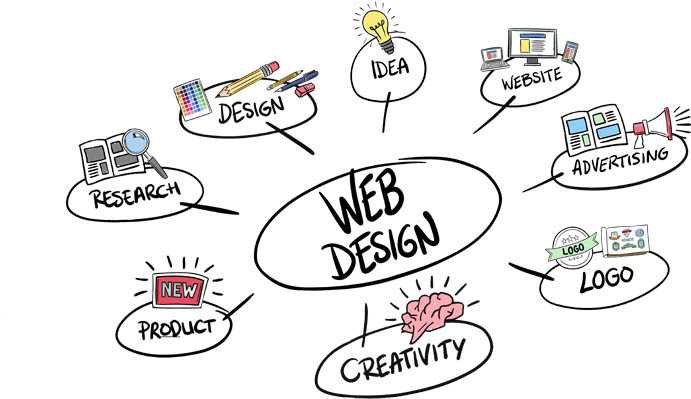 An IT professional who specifically deals in the designing, utilization and visualization of any website Web Designer who needs to excel both in technical as well as graphic skills who can very well visualize how a website will function and what is the outlook of the website.

There have been many instances where you might have come across the word web developer that is quite vividly used interchangeably with web designer but one must know that a web developer is a software developer who focuses on the integration of the database systems by creating higher level of interactions while working on programming languages.

What is meant by web developer ? 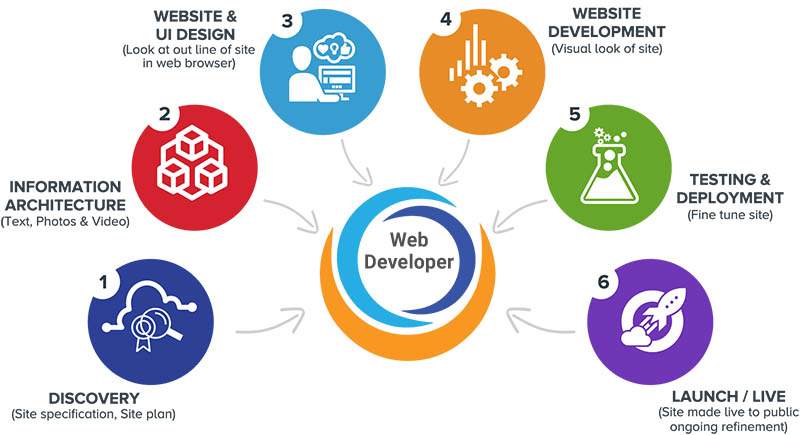 A Web Developer is a specialized programmer engaged in developing world wide applications with the help of client server model using JavaScript, JSS and HTML in  the clients, ASP .Net, Python or Java in the server and http for maintaining communications between server and client.

A web developer is also responsible for managing the traffic the website can handle. The functionality of the interface or website and its actual look  is one of the major responsibility of a web developer. A web content management system is used to maintain and develop different web applications.

Majorly responsible for building of interface and designing, alongside managing aesthetic of websites between the clients and business, ensuring the navigation work smoothly. Web designer are more likely to work for the digital designing agencies or the IT team of an organization. and they need.

A web designer is the one who has an expertise in designing best practices, understanding users and handling client needs, also not to ignore the basic skill of being the best communicators because creating designs and layouts of a webpage or a website is not very easy. 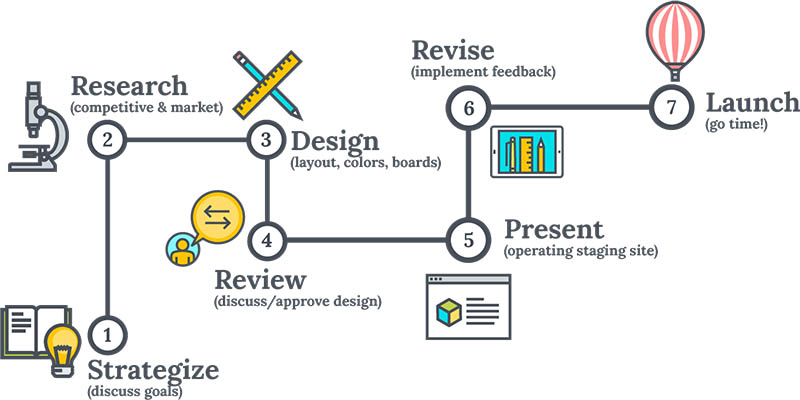 It also involves working on a new website or updating an already existing one that must be appealing to the desired target audience. In some websites even coding can come in the role of a web designer.

As a web developer, you could work as a freelancer who takes projects on a daily basis from various clients on an individual basis. Many net developers start their careers with a complete awareness, commonly front-end or backend development.

The roles will range relying in your work scenario, however day-to-day duties might commonly consist of:

There are specifically three kinds of web designers which you might run into. These three types are generally responsible for managing in and out of the entire designing of a webpage or a website. They are 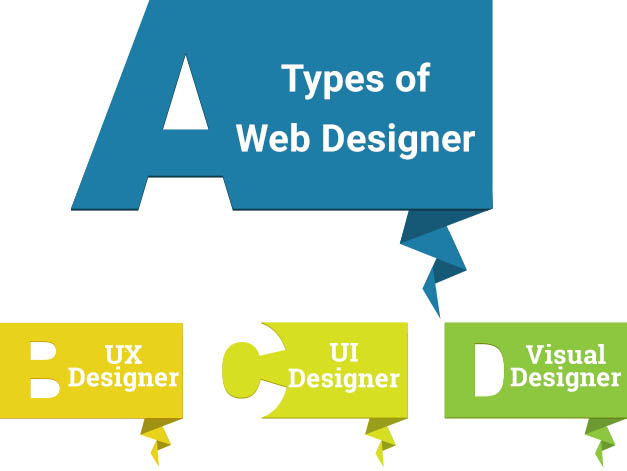 1) UX Designer : A UX Designer specially makes a product or service accessible, usable and enjoyable. He is solely the person who is responsible for  optimization of the interaction level of the products and humans.

While there are many companies that are into designing of user experiences, the term is most often associated with digital design of app and websites. If you are into the technical field you should know the though the general phase of design tends to remain the same but the exact process varies from not only company to company but also product to product.

2) UI Designer : Sometimes when we tend to search for UI Designer, we might ourselves more entangled because UI Designer and UX Designer are often lumped together, making it tougher to exactly understand where UX ends and UI starts.

There is definitely some similarities but you must know for being the UI Designer you must have an entirely another level of skill set .The major functions of a UI Designer is designing the screens through which the user actually function and create visual segments. and their interactive effects that smoothens the overall development.

3) Visual Designer : Visual Designer is not only into aesthetic appeal but it also aims to improve a product's usability with proper images, space, layout, typography, in fact even the color.

They have the major responsibility of creating the best first impression, that usually forms in 50 milliseconds. The smallest and the subtlest details have to be kept in mind because it determines what users actually think and how they will react.

Web Development is fast turning into one of the most attractive and highest paid professions in India and the International Market .Developers also can be categorized consistent with their style of work -

There are three types of Web Developer. 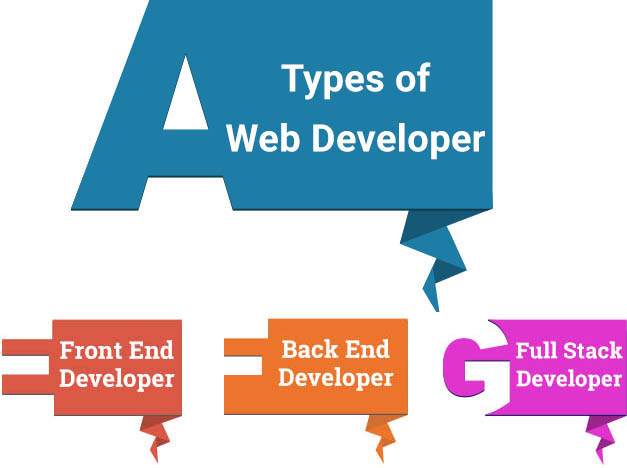 1) Front End Developer:- Ones who have to specifically deal with the formulation of  graphical user interface of a website or a UI product that manages the behaviour and visuals that run in browsers. It mainly uses technologies like CSS,HTML and JavaScript and mainly concerned with the view level or  interaction part of the website. Several tools and platforms are available for front end development for eg:-word press, Drupal etc.

2) Back End Developer:- One who is responsible for managing the backend of a website which is a combination of servers, databases and various applications. They are majorly responsible for developing the components that helps browsers communicate and transfer data with servers and databases.

3) Full Stack Developer:- One who can work with all the stacks of the software solutions; that is someone with the knowledge of client side and server side development and good interactions between both developments. Full Stack Developer also need to have a deeper understanding of scalability, maintenance and security 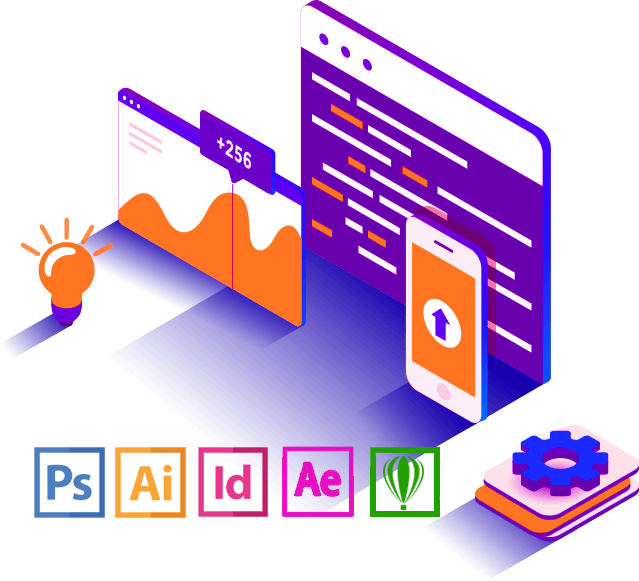 1) Photoshop :- Photoshop is a raster graphics editor. It is made by means of Adobe Inc for Windows and macOS.  Since its launch in 1990, Photoshop has come to be the industry well known for graphics designers, virtual artists and net designers.

Although there are many tools  available these days for web designers, and many of them are quicker to apply, none of the equipment today offers you the the flexibility and one-stop store effect of Photoshop

2) Illustrator :- Today, web designers have more than 300 CSS properties at their fingertips. New techniques are available to specific your creativity on an internet web page and deliver the right messaging.

3) Flash :- It has been used to create more interactive graphically beautiful web sites and has greater design abilities than different methods that use coding. With the usage of the free plugin of Adobe Flash Player, internet browsers are capable of showing animations constructed with Flash from any website for any computer to peer.

1) HTML :- Hypertext Markup Language, or HTML is the standard markup language for files designed to be displayed in a web browser, basically structured in web page and content.

2) CSS :- Cascading Style Sheets (CSS) is a stylesheet language used to explain the presentation of a file written in HTML or XML (which includes XML dialects consisting of SVG, MathML or XHTML). There are many most popular css frameworks which makes the web designer work simple and easier. CSS describes how factors need to be rendered on screen, on paper, in speech, or on other media.

While there are numerous programming languages, the most common ones utilized in internet development are JavaScript, HTML, CSS, PHP, and so on. 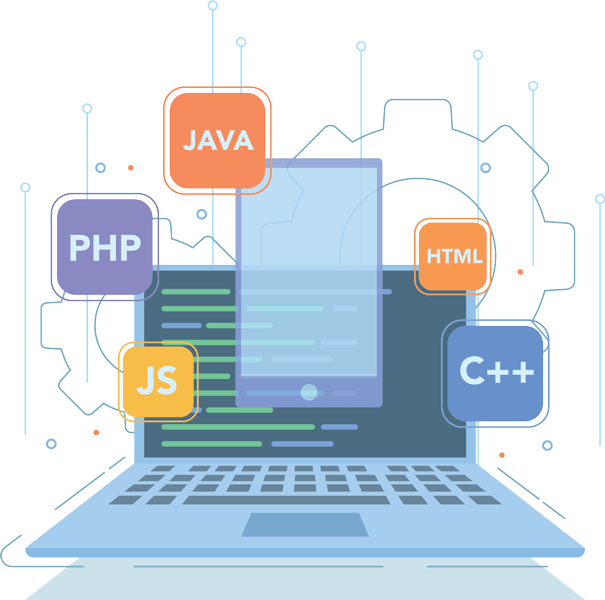 1) PHP :- PHP is a server scripting language, and a powerful language for making dynamic and interactive Web pages.PHP is a widely-used, free, and green alternative to competitors consisting of Microsoft's ASP.

There are many most Popular PHP frameworks available, which make the website more secure and easy to develop.

2) Java :- Java is an exclusively high-level,-primarily based language which is object-oriented programming language that is designed to have as few implementation dependencies as possible.

3) Python :- Python is an interpreted high level purposeful  programming language. Its design philosophy emphasizes code readability with its use of considerable indentation

Web Application Framework or virtually “web framework” is a software program framework this is designed to assist the improvement of web applications consisting of internet offerings, internet resources, and web APIs.

Websites have grown to be vital for groups on this evolving global stage for developing a distinguished on line lifestyles. Therefore a proper framework helps to keep this manageable and has its own benefits of being time saving and economical

Hopefully, we have a higher information of the key differences among a web  designer vs. a web developer. To carry everything collectively, let’s test a short breakdown of the biggest differences among these  roles:

1) While designers create awareness on appearance and usefulness, builders focus on capability and structure.

2) Web designers conceptualize the idea and appearance of an internet site, developing a mockup based totally on visual, UX, and UI factors. Web developers deal whether the idea is technically and financially attainable, and in that case, program and code the web page.

3) Web developers require a solid amount of technical understanding.  While there are a few studies and evaluations involved, his role is less technical and greater about the visual and creative elements of an internet site.

4) There are specific types of net builders, which include front-end, lower back-quit, and complete-stack developers. The 3 fundamental types of web designers are UX, UI, and visual designers.

The future of the IT sector is very well secure and talking about web designing and web developer they have a lot of opportunities unfolded ahead of them. As a web designer you can do freelancing which comes with the benefits of self employment and reasonable pay.

As digitalization has gained momentum, web designers need to design new or existing websites with proper updates, so this is a never ending cycle as this will continue growing. They have opportunities from all sorts of businesses. You have a huge chance of taking home around 4lacs to 5 lacs per annum with a basic experience in this niche.

Hospitals, faculties, nonprofits and tech giants all depend on web developers to serve their groups. Strong computer programming abilities can cause excessive requirements in any industry for the reason that your competencies could be critical to the corporation’s achievement.

So this is one of the ever competent and highest growing career. You can easily make more than 3.5 lacs per annum with only an experience and skill set of around 1-4 years

You need to now have a more clearer understanding of web layout, lets discuss now.

The difference between a web developer and an web designer is greater than you think. A net fashion designer brings a brand’s idea into an on-display screen reality, and knows precisely what the particular target audience will enjoy.

An internet developer builds the website’s middle shape, the use of coding languages to construct logical, programmatic web sites.

However, just like mustard and ketchup on a hot canine, once in a while you want each to get the quality experience. When constructing a website from not anything, you need an internet developer to build the foundation, and internet designers to make it appear and experience the manner you and – extra importantly – your users need.