What is backend developer

Everything Things You Should Know As A Backend Developer 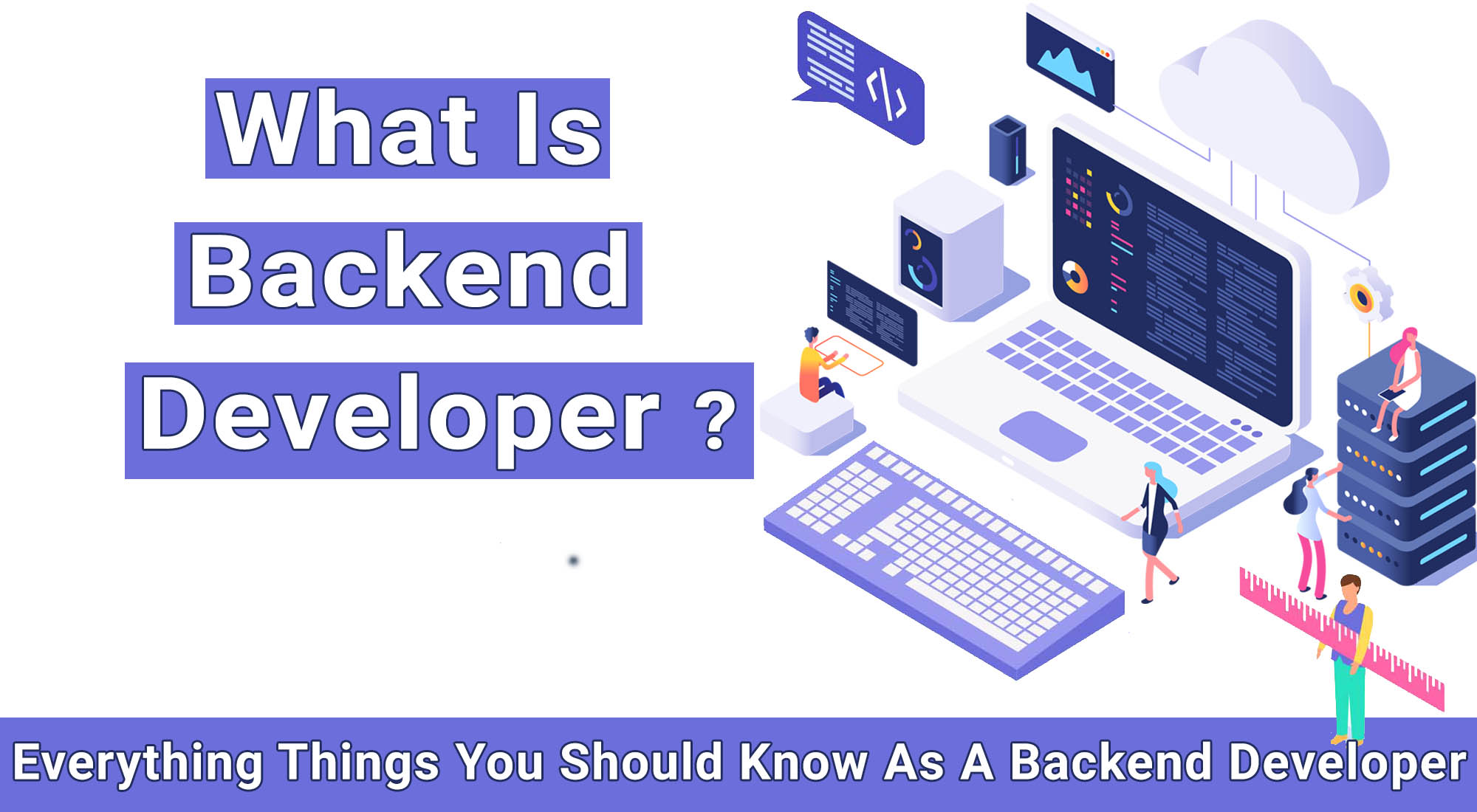 Web development is the process of creating a website which includes its functioning, physical layout or visual appearance which ought to be appealing, management of network traffic etc. The professional who carries out the task of web development is known as a web developer.

In this artilce, we will provide the complete detail of regarding what is backend developer.

What is backend developer? 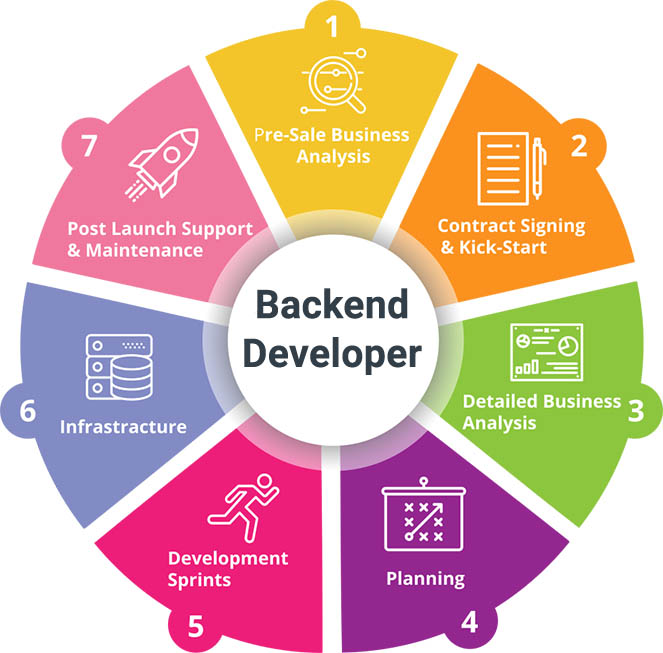 The web server accesses the same information and delivers it to the end user on the browser. The above discussion mentioned 3 different aspects of web namely Database, Web Server and Browser. Web server and Database are a part of the backend of the website.

For an easy understanding let us take an example of what pertains to be backend and frontend. Let’s say you are researching a topic and came across a blog you would like to read. You go to the link and the blog shows up, now the font and colors and designs etc you see on the page is frontend whereas the written content on the website is a result of the web server fetching the data from the database which happens with the help of backend infrastructure.

Roles and Responsibilities of a backend developer:

To answer the question as to what is the role of a backend developer here are a few things listed below: 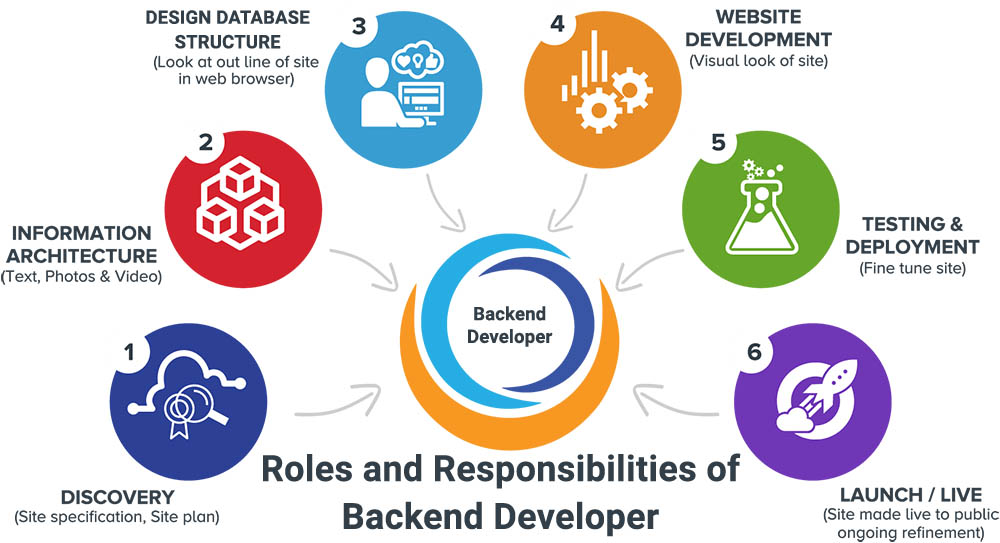 As we have established that the backend developer is responsible for creating the basic foundation of a website or an app the same can be attained with the help of some tools available in the market. Tools used for backend developer are as follows:

Backend-as-a-service is a model wherein the Developer outsource the whole backend development work related to development of a particular website or application. BaaS allows the team to focus all its resources towards the frontend of the web or application.  Firebase is one of the BaaS available out there in the market. Flutter is supported by firebase. There are various videos and documents shaped by the flutter community on using the firebase. Following are some of the services that can be availed by the use of firebase:

The tagline of GitHub is “Where the world builds software”. GitHub helps you and other works on the same project from a remote location that can be anywhere on the face of earth. It provides you with features like repositories, branches, commits and pull requests etc. GitHub is a code hosting platform. GitHub’s saftery to use depends on the user, it is as safe as you can make it. It was launched on 10th April, 2008 and was written in Ruby ECMAScript Go. It is totally free of cost and due to its community it is the most used collaboration medium among the coders. Following are some of the vital characteristics of GitHub:

API is an abbreviation for application programming interface. API is a set of definitions and protocols that helps in building and integrating website or application. Postman API is one such API used in the development process of the backend of the web. Following are some of its prominent features:

The name seems to have been originated in respect of native America tribe for it being resilient and durable. Apache projects are mostly written in Java. It is written in C language and CML. According to the latest survey Apache served more than 24% of the world’s busiest websites. Following are a few features of the same:

Python is a programming language for Backend Developer. It is used mainly to build websites, apps and software, automate a particular task and perform data analysis. Python has been very relevant in current times among the coders community.

Java is a high level object oriented programming language for backend developer that is designed to have as few implementation dependencies as possible.

It is a programming language for backend developer mainly for web development. It was originally created by Danish-Canadian programmer Rasmus Lerdorf in 1994. It helps in development of dynamic and interactive websites and is still as relevant even after the introduction of new languages like Python etc mainly due to its speed. We have listed down some of the pros and cons on PHP down below:

Career as a backend developer:

A degree in computer science and thorough basic understanding and knowledge of various programming languages for backend developer can land you a job of your dreams.

The future as a backend developer is very shiny at the moment as the information technology industry is at the boom due to the pandemic and our huge dependency on the internet.

We need website and mobile applications for almost everything we do in a day which leads to huge companies hiring backend developer to keep their products up and running. A backend developer can get paid an average of $114,000 per annum.

There can also be an added cash bonus of around $4,000 to $5,000 per annum along with other benefits like stock options etc. San Francisco is the highest paying place in the US for backend web Developer.

There cannot be a comparison as such between the 2 of these apart from the work they do and tools they use in order to do the work. Following table will help you understand the difference better:

From the above discussion it is very evident that what backend developer does is they work behind the curtains but that does not make them any less important.

They are the most important in laying the foundation of any website or mobile applications. Their understanding of the project and client requirement is of the utmost significance.

If the end goal of the company is to provide the customers with interactive and logical website then effective backend Developer is the way to go.