What technology framework is used to build hybrid mobile apps 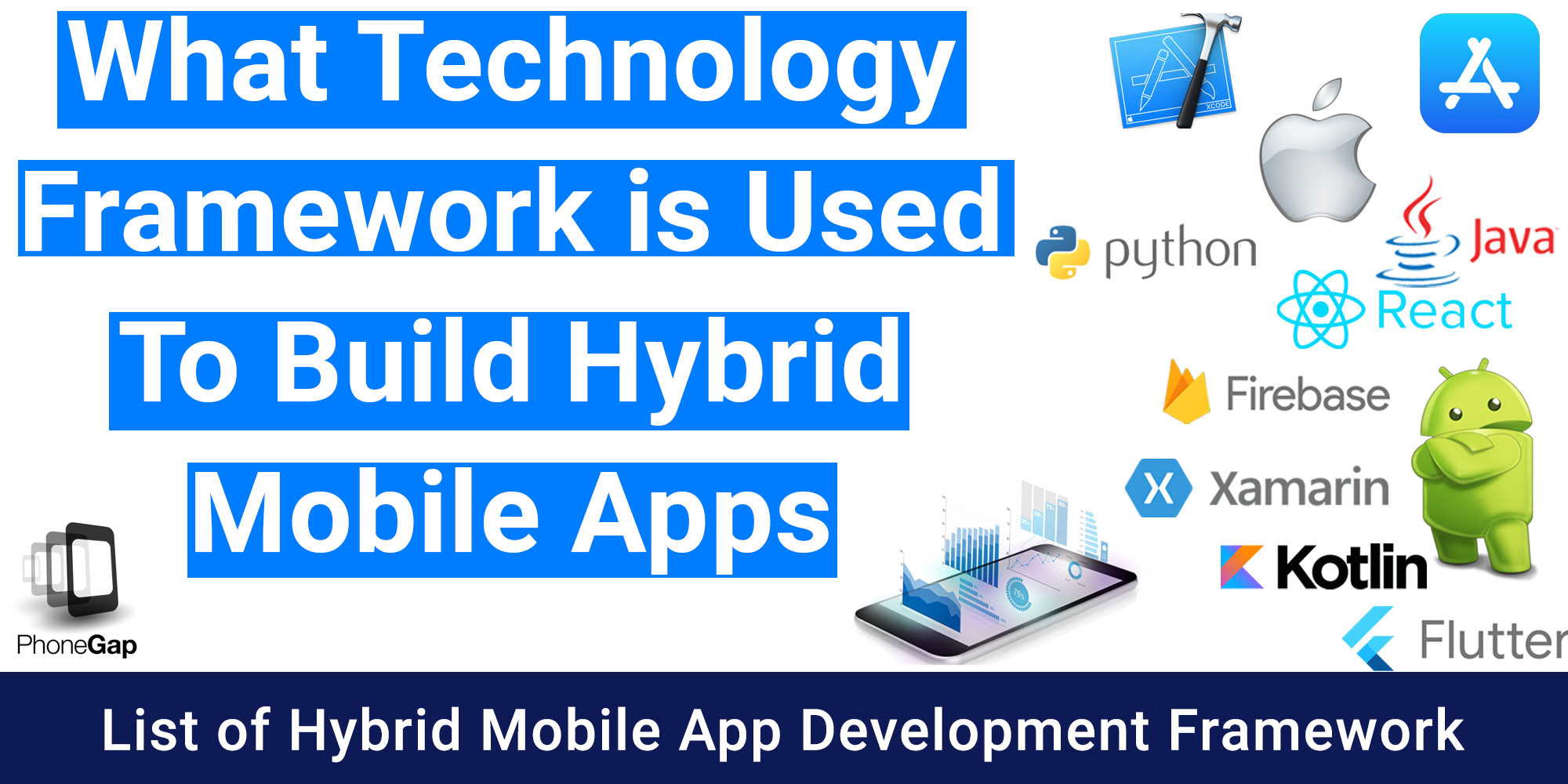 In this world of information, business men required an excellent access in order to valuable their data at best fingertips. A lot of companies are moving towards mobile apps and leaving behind the desktops in order to overcome their exposure which is online, as well as it also to solve fundamental issues on the go.

Each and every organization has it’s personal goals and unique structures, and choosing best customization technology that leads to company’s success. In app development industries we can see one of recent evolution which is disclosure of very large number of hybrid mobile or android app frameworks.

There are lot of applications, features, pros as well as cons,  composition and functionality that they all have. Here we will discuss the universal recognition of hybrid app development frameworks with its pros and cons.

What is hybrid mobile app development?

The hybrid mobile app development is actually a software application and it is combination of both web applications and native apps. Essentially, hybrid apps are considered as mobile apps and then these are further added in native app shell. When from play store or from app store they are downloaded and then installed, then the shell has ability to connect to whatever the capabilities provided b mobile platform through a browser which is embedded in app. This browser and it’s plug ins are not visible to the end user and run on back end.

These hybrid apps are very famous in world due to reason that these apps allow developers t write code once from mobile app and then still accommodate to various platform. These apps may perform slower than native or web version of similar app because hybrid apps have an extra layer between target platform and source code.

This shifting of desktop to mobile was not incidental, in fact it was gradual. There are multiple aspects that are related to hybrid mobile app developments that are responsible for it’s success; like frameworks, platform, ASO etc. We will discuss here the frameworks of hybrid app for the development of this app (Malavolta, et all 2015).

To find statistics of any app in android is an easier task. It’s first step is to open play console app, select an app (here hybrid mobile app) then tap a data card to see it’s more details. By using play console app we can find that how app is working, which statistics it is following. It helps to find the performance of app (Malavolta, et al., 2015). 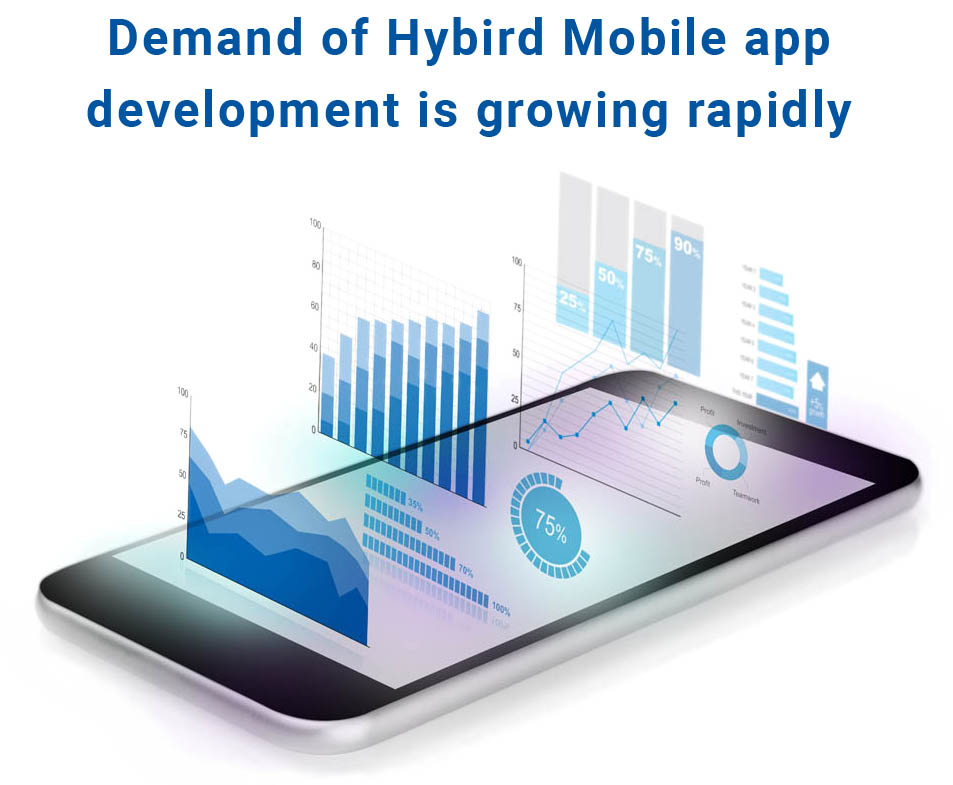 The main advantages of hybrid mobile app are:

1. Compatibility of Cross-platform: Frameworks of hybrid app allow their developers to use common code base across the both iOs and Android devices.

4. Effectiveness of cost: For various sorts of operating system the save developments cost on building different versions of same app.

The disadvantages of hybrid app developments are:

1. Performance: Now hybrid apps have various uses like compiling to machine code via reactive native. Technically there is existence of layer between source code and operating system that are responsible for slower performance for resource-intensive applications. This is one of disadvantage of hybrid mobile app development.

2. Complexity of text: Hybrid apps ma share huge amount of codes between the platforms, but sometimes few of that codes are often native in order to take the advantage of underlying hardware. Just depending on our project, this may become a cause that can add to complexity of our test suit.

3. Easier to mess-up UI/UX: Whether we are using hybrid or native it just depend upon developer to ensure their app UI that further deliver the consistent UX. Hybrid app developments offer a very large amount of flexibility and if we have no idea that what we are doing then it is easier to mess-up. If we haven’t practice web design then there is inconsistent UX that might lead due to poor connection of internet that we are using at that time of performance. 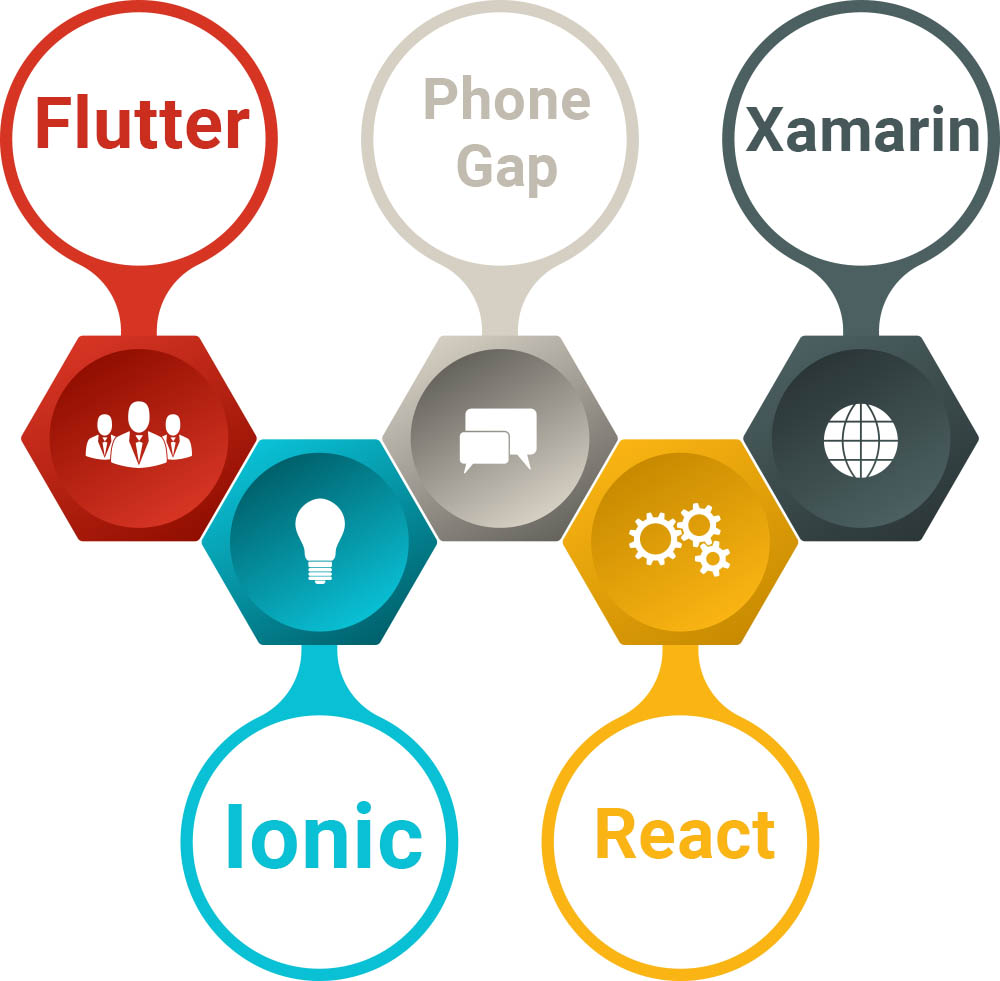 One of biggest approach of hybrid mobile app development is to write code once and then use it across the all mobile devices. On the other hand, web developers could develop hybrid apps from scratch, and this would be done with the help of using multiple kind of frameworks. We will discuss some of famous hybrid mobile app frameworks.

Flutter is a future-proof hybrid development platform that is built for the now and the future. Google's colossal response to the hybrid app market was unveiled little over a month ago, in July.

A claim that it will set a new standard while still in its infancy is an understatement. Flutter's main selling point is that it can be used to build applications for any platform, not only Google Fuchsia. DART, the programming language used by Flutter, is a hybrid of well known Java and also of Kotlin.

For reactive native 2020 was proved to be a good year which is best hybrid app development frameworks, and it has been still expected that it will be continue into 2021 as well. There are many people that begin to do comparison between ionic as well as React Native as people observe them as common radical to each other.

React Native, on the other hand, provides users with a more stable and native-like experience across apps, while Ionic, according to experts, leads to better UI and performance across apps. In the years to come, this framework has a great deal of potential in order to become in fact a best hybrid frameworks for this hybrid android app development. React Native's ability to command is entirely dependent on how it is used.

As a result, the first few times it is used, a developer may not be able to master it. To fully grasp the reactive pattern in the mobile hybrid framework, some practise is required. In addition, the limited both native and also UI features forces the developers to do more coding. Of course, given that it teaches a slew of valuable lessons.

React Native is one of the most widely used frameworks for building mobile apps for both iOS and Android platforms. Developers can now create cutting-edge mobile apps using only a single JS code-base. The React Native framework is a favourite of Java and Swift developers. In addition, it includes Native modules and components that aid in app performance. In order to create hybrid mobile apps for the future, many react-native businesses are turning to the framework. For example, brands like Facebook and Instagram use this best invented hybrid development framework to create apps that are world-class.

Because it is integrated with the Cordova framework and Adobe, Phone-Gap is also known as Apache Cordova. In addition to JavaScript, CSS3, and HTML5, developers may use this framework to create applications.

A single code-base is all that is needed for cross-platform interoperability with Phone-Gap. As a result, the developer's workload is reduced, making it simpler for him or her to go forward. It's an excellent option if we have a tight budget and need to construct an app.

Additionally, Phone-Gap includes a slew of useful capabilities, like better access to native APIs, a robust back-end system, prominent UI frameworks that may enhance the user experience, and more. There's no doubt about it.

With Microsoft's help, Xamarin is the best and top most frameworks for mobile or android app development 2021 that developers can employ. It has been written in C#, which is more up-to-date than Java and Objective-C and has several advantages over them.

We can create hybrid applications for iOS, Android, Windows, and other platforms using Xamarin's platform. It's widely accepted that it provides the same level of speed and user experience as a native programme. Xamarin applications are a force to be reckoned with because to their native UI capabilities. One of the most well-known names in hybrid app development is Xamarin for Mac.

Interesting enough, the WORA concept, which means "Write Once, Run Anytime," is well-known in this context. There is a large and active Xamarin community, both on the official Xamarin forum and on third-party websites.

Getting started using Xamarin is a breeze. Xamarin's installer must be downloaded and launched on the computer where the developer is working. To finish the setup, users must first install the Android SDK and Java, then specify the locations of those two components. In order for developers to use Xamarin Studio, they must finish the process and follow the instructions on display. The greatest hybrid framework for mobile app development is now complete and available for use.

Ionic is one of the most widely used frameworks in existence today. PWAs may be built using the library's front-end construction and user interface components, which make it a powerful tool for developers. It also gives developers the ability to generate stunning visuals for their applications.

In terms of user interface design, the Ionic mobile hybrid framework may assist developers with things like picture design and layout and typography as well as unique themes. Type-Script and Node.js hybrid applications may be constructed using the Ionic CLI (Command Line Interface).

So we can make a hybrid app and receive frequent upgrades, it's a big benefit. The Ionic CLI has a built-in development server, debugging tools, and other important features that help accelerate development.

This framework is one of the excellent option for building apps and components for a large range of systems (operating system). HTML5 hybrid apps may be quickly created using this method.

There are many ready-to-use components, and the style is done automatically for you. Mobile users will find the Onsen UI simple and intuitive to use. Apps built using Onsen UI will run smoothly on any device, regardless of specs.

Jquery is better suited to app shell development than app development itself. Even though it isn't suggested to use it on its own, other frameworks may benefit from its use.

In addition to integrating with the Angular CLI, Router support, and code generation, his mobile app framework includes full-stack interaction with newer Angular versions. It also comes with a community-created plugin that allows you to use the Vue CLI, Vuex, and other excellent Vue.js capabilities through the Vue.js framework.

Native Script apps, on the other hand, are totally native and utilise the same APIs as if they were produced in X code or Android Studio, thus they're essentially the same. Because we don't use Web Views, we get a platform-native UI that runs at native speed.

Without the use of wrappers, software writers may reuse third-party libraries from sources such as the Cocoapods project, Android Arsenal, Maven, and npm.

An open-source hybrid app framework that can be used to create desktop, mobile, and web-based apps that look and operate like their native counterparts.

In the last several years, hybrid app development has risen tremendously. As a result, hybrid mobile applications have become more popular since a development option, as they provide quicker development, simpler prototyping, and a higher ROI.

When developing a mobile app, the hybrid architecture may also assist us to construct web and desktop applications more quickly as a method to reach more clients. In terms of overall appearance and performance, hybrid mobile applications are now closer than ever to native ones thanks to recent developments in the JavaScript ecosystem and the frameworks for each of the hybrid mobile apps included below.

When developing JavaScript-based hybrid mobile applications, we need ensure that our source code is protected against theft and reverse-engineering. Protect our code in only two minutes by signing up for a free trial of Jscrambler. To sum up, app frameworks are crucial in a way that can't be overstated.

As the number of enterprises requiring mobile applications increases, these frameworks will continue to flourish and expand in the structure. Low-code and no-code technologies are poised to take the lead in mobile app development in the next years. In order to suit our app-making needs, we may use these frameworks.