What is hybrid mobile app development

A Comprehensive Guide - What is hybrid mobile app development 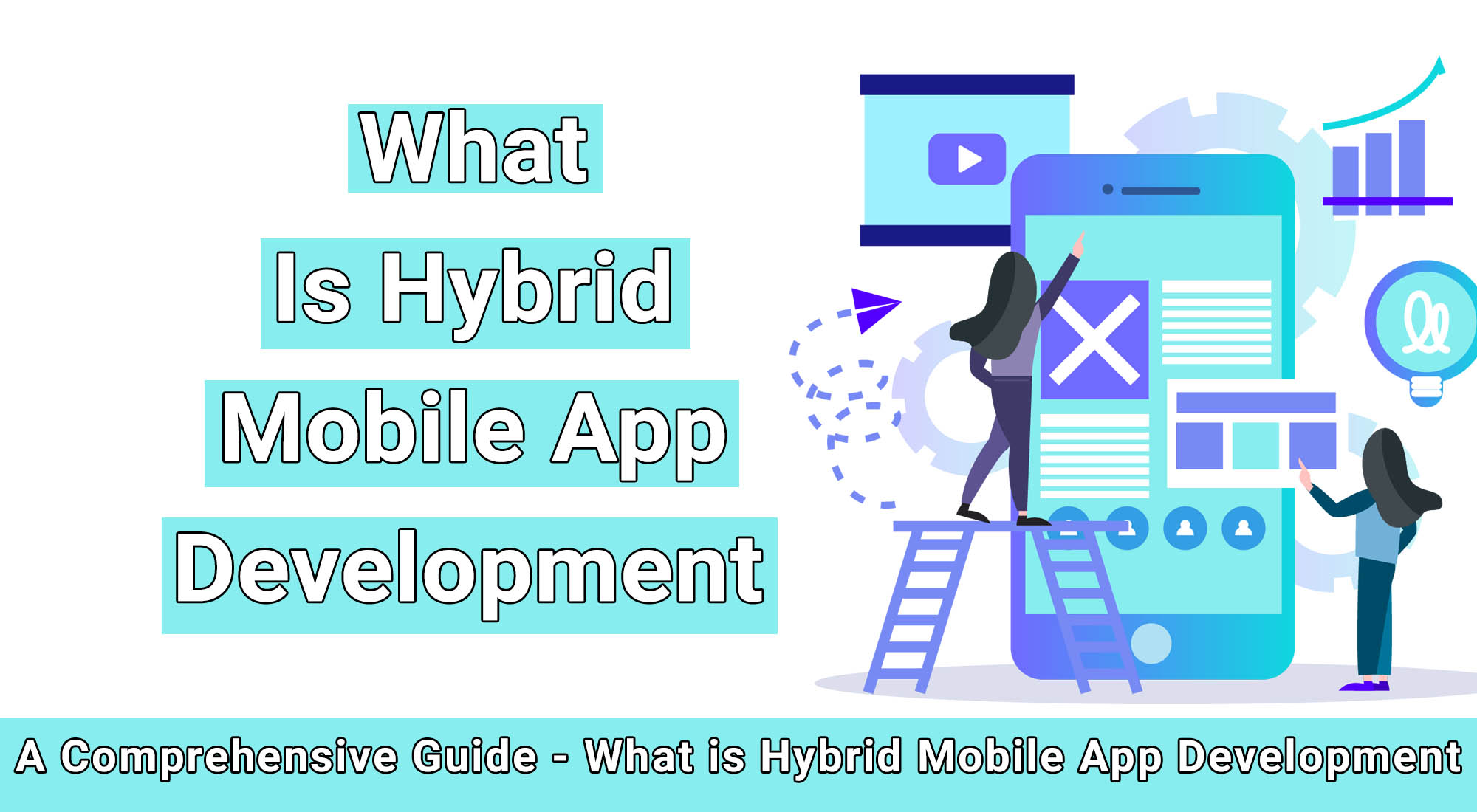 Mobile App- A mobile application is a category of software which is constructed to run on a mobile device as commonly called as apps. This mobile app runs on smartphone and tablets. Mobile Apps are independent software with limited number of features & functions. At present, Apple and Goggle are two most popular and demanded app developer platforms. 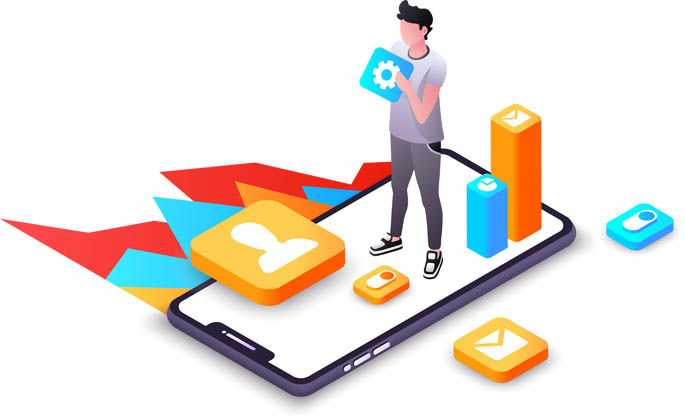 Mobile Statistics - Mobile and mobile app with best and most useful features are running the world. Every human from 2-year kid to an 80-year-old grandmother are fascinated with smartphones and mobile apps.

That’s the reason mobile industries are growing rapidly like anything and will continue to grow with 3X in coming days. Let’s witness the number and usage of mobile app till this year below-

What is hybrid mobile app development?

Hybrid mobile apps are the mobile applications that are downloaded on mobile device, as like all other mobile app.

A hybrid app is a software application that is the combination of elements from native applications and Web applications. It is majorly a mobile app wrapped in the shell of native mobile app.

Hybrid apps one of the best mobile app development technology which are available on app stores, which can access hardware on the phone, and are downloaded on mobile devices.

Hybrid apps offer a range of advantages such as: 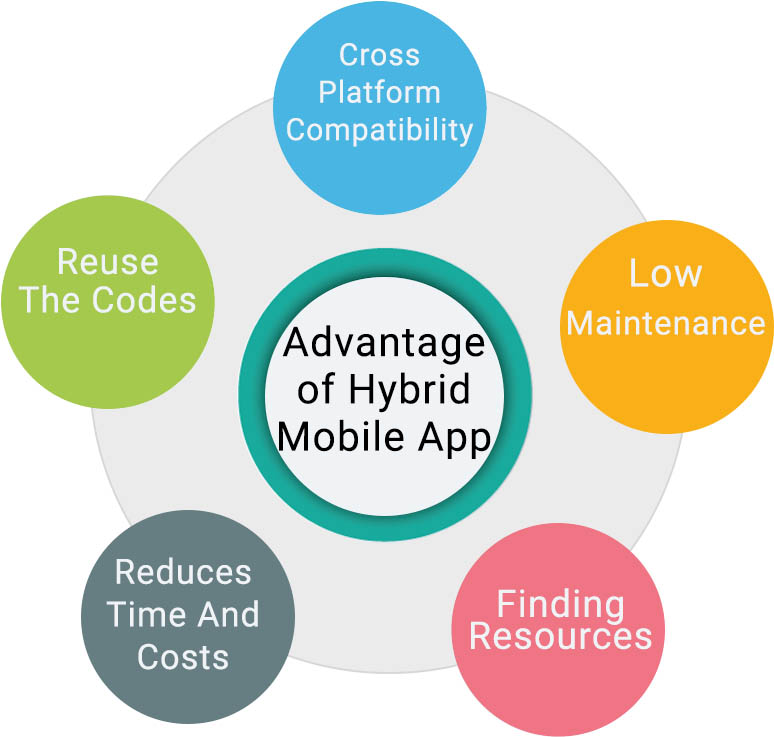 1) Reuse the codes - The developers of hybrid app write the code once and utilize it across all mobile platforms.  Thus, hybrid app is providing user with supple development experience.

2) Reduces time and costs - As hybrid app write the code once and use over multiple platforms, which ultimately reduces development time and development costs.

4) Maintenance - Because hybrid apps have single code base maintaining the development of mobile app becomes much comfortable, faster and easier.

5) Cross-platform compatibility - Hybrid app frameworks permit its developers to utilize its regular codebase over both Android and iOS devices.

1) Performance - Native apps development is specific to single platform, hence is optimized for maximum performance. Hybrid apps is dependent on a third-party platform for operations, thus adding extra layer which do results in slower performance.

2) Test Complexity - Hybrid apps share many similar codes between platforms. It uses some native codes to get the hardware supports. Depending on the developer’s project, this may add a complexity to test.

3) Mess up UX/UI - Hybrid app development provides a lot of flexibility, and which results in easy creation and working that subsequently makes it easier to mess up. Also, the Poor internet connectivity drives to a lacking UX.

With many demanding technologies and software that a hybrid app utilizes for the development of mobile apps, it has become the choice of many app developer and platforms. The apps that are under the name of hybrid app are listed below –

Development of any types of mobile app depends upon wide range factors such as development platform, the location, the complexity app and the scalability of the app and many from small to large.

With considering all the major factors for the hybrid app development, the cost of development ranges between $5000 – $1, 00,000. And it takes Approximately 200 – 5000 hours for the development of a mobile app. 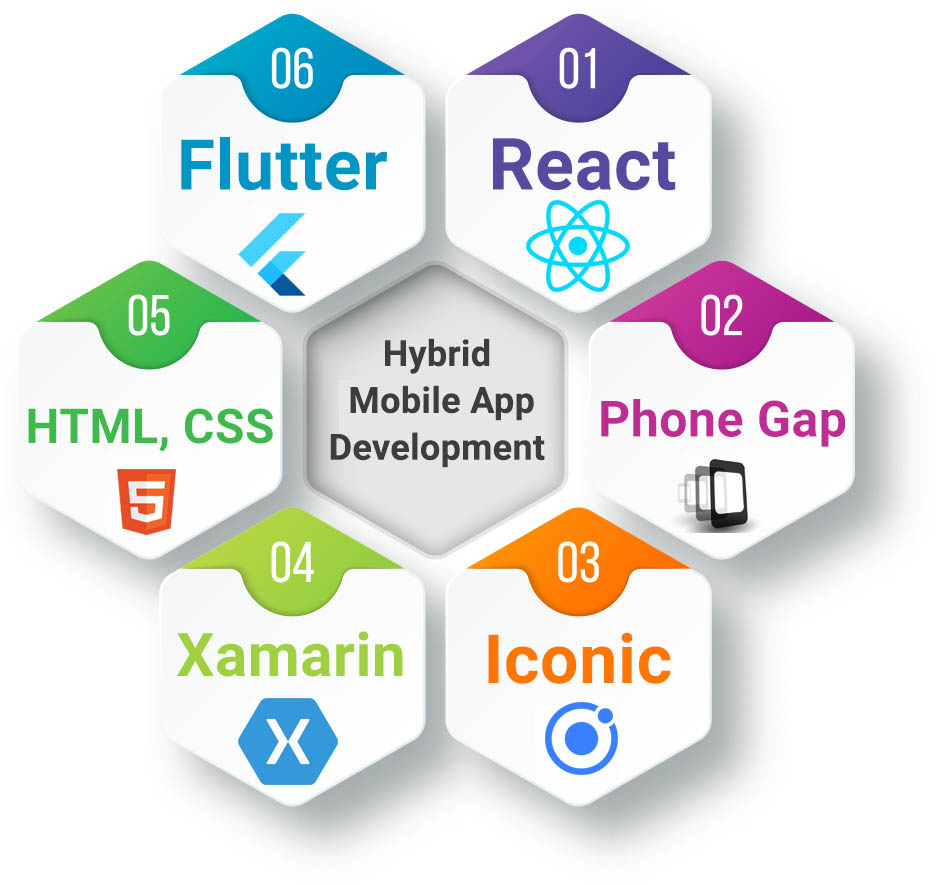 Flutter offers a chance to the developers to constructs the mobile apps which will have a high-productive value since it writes a single codebase for Android and iOS. It develops a space for developers to challenge their creativity and create a highly creative UIs with dynamic designs. Flutter also allows compelling interactions which direct to the creation of exclusive MVPs (prototypes). That is reason behind the big brands ought Flutter to develop their mobile apps.

PhoneGap is called as Apache Cordova which is supported by the Cordova framework and Adobe. PhoneGap is one of the best and on top framework for Hybrid app. PhoneGap offers a convenient cross-platform with just single code for all platforms. It reduces the work of developers and provides them with less budgets. PhoneGap has some very notable features such as max access to Native APIs, strong backend support, UI libraries, etc. Majorly, it has Adobe’s support.

Xamarin has become one of the intelligent frameworks used by mobile app developers. Xamarin is written using C# with has many improved features over Java and Objective-C. Xamarin include Java, C++, and Objective-C which makes it unique from other framework. Xamarin has huge libraries semblance. Xamarin is used for development of hybrid apps for iOS, Android, and Windows. It has proved itself capable of giving an equal performance and UX of a native app.

In 2021, Ionic is considered to be the most popular frameworks. The front-end is built on height of AngularJS and Cordova involving APIs of Shadow DOM and Custom Elements. With Ionic, developers find it easy to develop Progressive Web Apps. Learning Ionic is very quick task for developers and makes enjoyable for them to use while developing app’s framework. It also enables developers to create amazing designs and representations in the apps. Ionic mobile hybrid framework will help a developer reach a successful height.

The Popular tools for building hybrid apps are the frameworks

As native apps for iOS and Android are ideal because they are capable of operating for both the platforms, hybrid mobile app technology is evolving, time saving and cost-efficient which makes it best option for mobile app development. High powered frameworks of hybrid app have made it stand in front of native app and has given user the feel of native app. Developers opt for one of these frameworks and best quality hybrid app and long running in market. Developer knows how to use easy and creative frameworks of hybrid app to make it work excellent in user’s hand.

Hybrid have web-based frameworks, which use HTML, JavaScript, and CSS of front-end technology, also have support of cross-platform frameworks which choose any a programming language and turn it into native code for the mobile device. The frameworks of Hybrid mobile app work quick, just like traditional application frameworks. It contains libraries of code, APIs, and other features to make app faster and easier.

With this count, the developers can estimate the number of jobs in the mobile app development market. Seeing the current scenario, developers have a great opportunities and experts says that this market will continue to grow in near future.

After a massive lockdown and break from all sort of activities, people have got connected to their mobile device like anything than before. The research studies have proven that the mobile industries are growing more rapidly and will continue to grow so. Thus, the future of any mobile app development is on brighter side. Therefore, there is a great and major opportunities in mobile app developments sectors.

The best thing about hybrid app is that it is the combination of both the popular apps – Native and Web. The developers do not have to think much to choose hybrid as it offers wide range of tools and frameworks for the development of any kind of mobile app. It also has all types of programming language support, API, design and UI / UX to attract the users towards it. In short it can be the best choice if developers grab it.