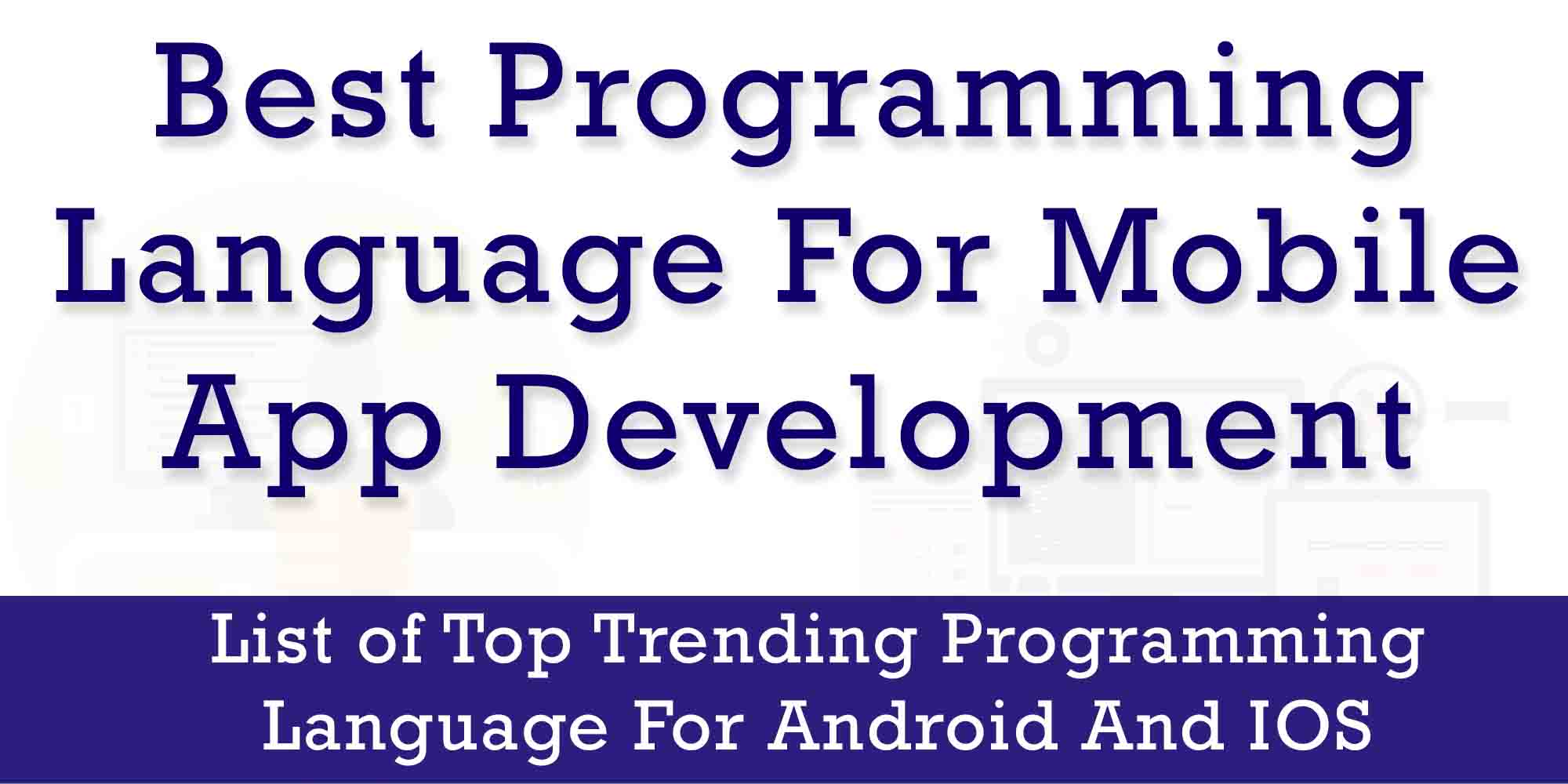 The digital age has been taken over by mobile technology. Several customers use their mobile phones to access the Net, communicate with relatives and friends, conduct business, and far more.

Users spend plenty of time communicating with smartphones, so there is such a high market for mobile app creation and a programming language.

Since several businesses are transitioning to the smartphone market, technology for mobile app development will continue to increase.

If you're thinking of creating a mobile app, you'll want to make sure you're using the appropriate and best programming language for mobile app development.

Determine your requirements before deciding which one of these programming languages to be used for your design. Evaluate which sort of app you have to create, and you'll find it much easier to narrow down all of your options.

People must scale the proposed mobile application to determine the developer's complexity, as this will determine which programming language to be using.

Evaluate which one of the best programming languages for mobile apps you could use based on your existing resources.

The mobile app industry is increasing at a breakneck rate. According to Survey's projections, demand for mobile app development services would outpace internal IT organisations' ability to supply. Without a doubt, the mobile app development industry is massive and will continue to expand indefinitely. As a result, anyone interested in learning software development capabilities can pursue mobile app developer learning. In reality, Mobile App Developer snatched the top spot among the best jobs and career paths globally, based on a high starting salary, work satisfaction, and skills to develop.

Currently, there are 2 type of mobile app operating system –

Android is a Linux-based open-source mobile operating system including phones and tablets. The Open Handset Alliance, led by Google and other corporations, collaborated to create Android. Ios takes a standardized approach to mobile application development, ensuring that developers only have to code for Android. Their apps can run on several Android-powered apps. Google launched the very first beta version of an Android Application Framework (SDK) in 2007

IOS offers frameworks that describe specific features that you can incorporate throughout your application, ranging from gaming and media to information security handling. The Foundations model is used to integrate common data structures and actions into your coding, while the UIKit framework is used to develop your app's interface. These are three of the most popular frameworks for creating iOS apps.

Native applications are designed exclusively for the operating system of a mobile phone (OS). As a result, you can build native Android or iOS mobile applications and applications for other browsers and computers. You can't customize apps because they've been made for only one device. For example, you can't choose a Blackberry app through an Android phone or perhaps an iOS app on such a Windows phone.

Pros: Native apps will benefit from becoming quicker and more consistent in terms of efficiency due to their single emphasis. They use the phone's power more effectively than other kinds of mobile applications. Native applications make use of the device's native user interface, providing a better consumer experience. Since native apps attach seamlessly to the device's processor, they have access to a wide variety of functionality such as Bluetooth, phonebook numbers, camera roll, NFC, and much more.

Cons: The issue with native apps, on the other hand, is that once you start creating them, you'll have to repeat your attempts on each application. You can't reuse the code you write for one application upon others. Prices grow as a result.

These are mobile applications that have the appearance and sound of native apps. They may have a home screen app icon, user interface, powerful features, and even the ability to work offline, but they're web apps disguised as native apps. Hybrid apps make use of a combination of web technology and native Functionalities. They're made with Ionic, Objective C, Swift, HTML5, as well as other technologies.

Pros: Creating a hybrid app is so much easier and less costly than developing a native app. As a result, a hybrid app will serve as a minimum viable, demonstrating the feasibility of developing a native app. They also download easily, making them suitable to be used in nations with poor internet access. They also provide users with a seamless experience. Eventually, there is far less coding to manage since they use a single line of code.

Cons: Hybrid apps can lack the power and pace that native apps have.

Swift is a new open-source programming language that works with the iOS, OS X, and tvOS frameworks. It's easy to maintain and doesn't have any Objective-C bugs.

Swift makes it much easier to expand projects and which make Swift one of the best technology for mobile app development specially for Iphone and Ipad application . Its programming language is adaptable, allowing this to add functionality to almost any application by following a programming template. It was explicitly released for iOS, iOS-supporting platforms, and Linux and has become the primary language used by iOS and OS X programmers.

JAVA is perhaps the most commonly used programming language and is also one of the languages of choice for too many mobile app development companies. On major search engines, it is even the much more searched programming language. The official Android development framework, Java, can be used in 2 directions. I could access it in a virtual machine or a browser window.

Java is a class-based, object-oriented programming language built to have as least implementation dependencies as possible.

Although Java is unlikely to be your first application for developing an iOS app, it could still be essential when dealing with cross-platform applications.

Developers regard Kotlin as a more advanced version of Java; it is an interoperable and excellent programming language that can overcome Java's flaws.

Its programming language is self-explanatory, precise, and proportionally typed. And it has many highly developed properties that make it a better alternative, and it works similarly to Java.

This choice is exceptional because it facilitates almost every IDES, making it suitable for any programming needs.

Python is a popular programming language that could use for various purposes. Developers used it to make cross-platform apps for the web, desktop, and mobile. It could also create any Android or desktop app from the ground up. Python is perhaps the most popular programming language presented to children in schools. Python is popular since it is easy to learn and perused. It's a simple, readable language that's a little complicated but not overly so. Use Python to build many widely used apps, including Instagram, Dropbox, YouTube, Reddit, Spotify, Quora, and many others.

This cross-platform architecture utilizes a specific code base across iOS, Android, Windows, and other systems, allowing it to take advantage of Coding #'s advantages. Using the advantages of code sharing, Xamarin creates apps that mimic the functionality of a native app. It is the platform for mobile app creation that saves far more time and money. With Xamarin, you can build native Android, iOS, and Windows apps from a single.NET codebase. The application gives you access to all of the features that the underlying platform and system have to provide, plus platform-specific features.

React Native is one of the best programming language for mobile app development. Reactjs is develop by facebook. This open-source Platform has rapidly become one of the most popular platforms for creating native mobile apps. It provides extensive support for IDEs and other mobile app development software and the ability to build native applications for iOS and Android. The ReactNative platform helps you to create native mobile apps with JavaScript that look and feel like React. Apps developed with React Native are accurate mobile apps distinct from those built with Objective-C, Java, or Swift.

PhoneGap, also identified as Apache Cordova, is a fully accessible mobile application development concept for Android, Windows, and iOS that uses CSS3, HTML5, and JavaScript to create native apps. This design enables native and hybrid input variable to be mixed, resulting in features that are neither results concerning mobile nor web-based.

Ionic is an application development concept that includes the HTML5 programming language. It makes it easy to create native apps and their user interfaces by combining HTML, CSS3, and JavaScript. This application development system is compatible with UIWebView on iOS and WebView on Android. Ionic is based on the AngularJS and Apache Cordova frameworks. Ionic makes it easy for web designers to develop, scale, and expand cross-platform mobile applications.

HTML: When designing web-frontend apps for mobile devices, there is no superior technology to use than HTML. HTML is also used by organizations that consider cross-platform mobile app creation to be a difficult challenge because it allows you to provide the right features and a better customer experience

CSS: CSS, or Cascading Style Sheets, requires learners to understand how to style text utilizing font attributes, change proportions, style backgrounds by changing the style and colour, use links by text-decoration, and modify different factors such as margin, width, icon location, float, padding, and so on.

Visuals and CSS transitions are ubiquitous presently, as they're being found in various big websites and applications, which is why understanding them is critical.

Javascript: JavaScript is a standard programming language that is easier to understand.

It's an understandable high-level programming language that supports both object-oriented and functional programming. It is a browser-based paradigm language that is often used to create dynamic web pages. Its architectures are well-suited to mobile app creation, operating on Android, iOS, and Windows. Many programmers prefer JavaScript because it is easy to use and manage. This Best programming language for mobile app development  also allows for a lot of flexibility.

Nearly every day, the mobile application development ecosystem advances and develops. Some best programming languages for mobile app development have existed for a long time, while others are still on their way to being mainstream.

Searching for the best programming language  for mobile Apps and technology for mobile app development are currently available can be daunting. Still, the functionality, efficiency, performance, variations, and other features within each language are vital in helping you create a mobile app that could stand out in your specialized field.